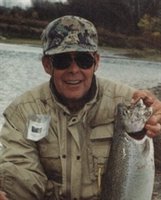 Donald R. Malmrose, 79, of 3274 Mapleshade Dr., Bemus Point, died Wednesday September 9, 2009, in Hamot Medical Center, Erie. A native of Jamestown, he was born November 17, 1929, a son of Sven and Gunborg Anderson Malmrose. He was a XXXX graduate of Bemus Point High School and following graduation played semi-pro baseball then served in the US Navy from XXXX to XXXX. Prior to his retirement in XXXX he was employed by the State of New York as a conservation officer. He was a member of Fluvanna Community Church, XXXXX. Surviving are a daughter Lynda (Jeff) Acker of Southern Pines, NC, a son Craig Malmrose of Ayden, NC, a step daughter Sandra (Brad) Anderson of Panama, a step son James Leach of Randolph, nine grandchildren Caroline and Christina Acker of Southern Pines, John Malmrose of Davidson, NC, Rachel (Benjamin) Berlin of Erie, PA, Vanessa Anderson of Panama, Steve and Angela Leach of Randolph, Kelly Leach of Charlotte, NC and Jessica Leach of Salamanca, four step great grandchildren, a sister Laurel (George) Gedeon of North York, Ontario, Canada and a niece Chrissy Gedeon of Toronto, Canada. He was preceded in death by his wife the former Joyce Rhinehart, whom he married June 23, 1983 and who died July 22, 2008. The funeral will be held at 11 a.m. Saturday in the Lind Funeral Home. Burial will be in Lake View Cemetery. Friends will be received from 7-9 p.m. Friday and for one hour prior to the service Saturday in the funeral home. Memorials may be made to Chautauqua County Humane Society, 2825 Strunk Rd., Jamestown, NY 14701