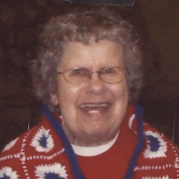 Bernadine B. Miller, 88, formerly of 123 Sampson St., passed away Sunday, February 9, 2020 at the Lutheran Retirement Home. She was the widow of Lawrence L. Miller whom she married July 28, 1954 and who died July 22, 1984. Bernadine was born February 14, 1931 in Syracuse, NY and was the daughter of the late Claude and Eugenia Plante Reidell. In earlier years, she was employed by the G.C. Murphy Co. and later by the T. James Clarke Box Co. for a number of years. Bernadine was a member of St. James Church where she volunteered for and had been treasurer of the St. James Thrift Store. She also belonged to the Disabled American Veterans Auxiliary and was a former Girl Scout leader. Surviving are four children: Susan (Joseph) Gurdak of Spring Creek, PA, Autumn Miller and Helen Miller, both of Jamestown, and Jennifer Allen of Gaithersburg, MD; four grandchildren: Joseph Gurdak of Spring Creek, Brian Gurdak of Columbus, PA, and Summer Allen and Audrina Allen, both of Gaithersburg; four great-grandchildren and one great- great-grandson; and a sister, Marcia Farr of Portland, ME; as well as her two 'honorary daughters', Susan Ingalls and Emily Mortimer of Jamestown. A funeral service will be held at 11 a.m. Saturday in Christ Chapel of the Lutheran Retirement Home, with the Rev. Daniel S. Rumfelt officiating. Burial will be in Sunset Hill Cemetery. Friends will be received from 4 to 7 p.m. Friday in the Lind Funeral Home, and for one hour prior to the service at Lutheran Saturday. In lieu of flowers, the family requests memorials be made to the American Diabetes Assoc. of WNY, 4955 N. Bailey Ave., Suite 217, Amherst, NY 14226; or Chautauqua Hospice & Palliative Care, 20 W. Fairmount Ave., Lakewood, NY 14750.