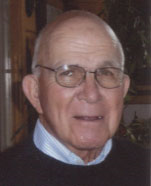 John W. "Duke" Johnson, 83, of Homestead Boulevard in Jamestown, passed away Wednesday morning, July 22, 2020 in his home following a lengthy battle with Alzheimer's Disease. He was born November 29, 1936 in Hamilton, Ohio, the son of the late J. Wilton and Beatrice Johnson, and was a 1954 graduate of Celoron High School. Duke was a US Army Korean War veteran, serving from 1954 to 1957. For 26 years he was employed by National Fuel Gas, retiring as a pipe fitter in 1996. A life member of the Lakewood Rod & Gun Club and the AMVETS, Duke also belonged to the Herman Kent Post American Legion and was a former board member and officer of the Harmony Conservation Camp. He volunteered over 40 years at the Lakewood Rod & Gun Club as a member, board member and officer. He also volunteered many years with Special Olympics, as a parent, coach, driver, fund raiser, steering committee member and friend. Duke loved life – dancing, nature, planting trees, sports, Harley riding, family and friends. He is survived by his wife, Carole Perry Johnson whom he married May 28, 1966; two sons: John W. Johnson, Jr. (Susan) of Jamestown and Michael C. Johnson of West Ellicott; six grandchildren: Chad Katulich, Jordan Katulich, Lauren Johnson, Alec Johnson, Bram Johnson and Jan Giordon; his foster daughter, Candy Unger; and his furry companion, 'Sunny'. Besides his parents, he was preceded in death by two sisters, Janet Kling and Joan Kling. The family would like to thank Dr. Vejendla and his staff, the Alzheimer's Association, Chautauqua Hospice & Palliative Care's many "angels", and all of Duke's caregivers. Observing New York State guidelines on restricted room occupancies during COVID-19, a walk-through visitation will be held from 11 a.m. to 1 p.m. Monday in the Lind Funeral Home. Masks are required at all times. A private family service will be held, officiated by the Rev. Tim Phelps. Burial will take place in Sunset Hill Cemetery with full military honors. Memorials may be made to the Alzheimer's Assoc., Chautauqua Hospice & Palliative Care, The Resource Center, or to Special Olympics.