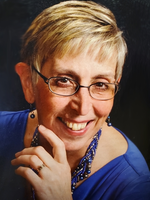 Paula J. Komarek, 66, of Panama, died Tuesday October 13, 2020, in the John and Orpha Blair Hospice House, Warren, PA. She was born April 15, 1954, in Fort Smith, Arkansas, the daughter of the late Arthur and Sarah Jeanette Bridges Osborne. She was employed by Buffamante Whipple Buttafaro as a senior accountant. She was an active member of Panama United Methodist Church where she was involved with the worship and praise teams and served as treasurer. She was also the treasurer for the Village of Panama. She was a trustee for the Ashville Library where she assisted with numerous fundraisers. She also was a member of the Lakewood Rod and Gun Club. Surviving are her husband Peter Komarek, whom she married August 24, 1975; two sons Jonathan (Jessica) Komarek of Hudson, NH and Matthew (Amanda) Komarek of Fremont, NH; three grandchildren Mason, Elena and Peter Komarek and a brother Joseph (Kelly) Osborne of Panama. A memorial service will be held in the Spring. Donations in her honor may be made to the Ashville Library, 2200 N Maple Ave, Ashville, NY 14710. You may leave words of condolence at www.lindfuneralhome.com.