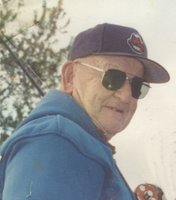 Jack B. Southern, 92, of Lakewood, formerly of Beason, IL, and Winter Haven, FL, passed on to fish gentle waters on Wednesday, August 11, 2021 in Heritage Park Rehab & Skilled Nursing Facility. He was born on Sept. 1, 1928 in Latham, IL, a son of the late Steven and Blanche Holmes Southern. Jack was a graduate of Beason High School. He was a Standard Oil distributor for many years and drove a school bus for more than 30 years. He was a proud volunteer fireman for many years and was on the Beason Chestnut Park Board. While living in Illinois, he was a member of Beason United Methodist Church and since moving to New York was a member of Bemus Point United Methodist Church. Jack enjoyed fishing and was a lifelong Boston-Milwaukee-Atlanta Braves fan and was a member of the Lakewood Rod & Gun Club. Jack is survived by his wife of 74 years, Wanda L. Fox Southern, whom he married March 16, 1947; a son Rodney A. (Mary Ann) Southern of Lakewood; two daughters Robyn (Anthony) Krotz of Cary, IL and Kristina Watson of Naples, FL; six grandchildren: Tiffany Parisi, Courtney Zahm, Spencer Southern, Jacob Krotz, Theresa Wells, Emily Watson; and six great-grandchildren. In addition to his parents, he was preceded in death by a son-in-law Arthur Watson. There will be no service or visitation observed at this time. Memorials may be made to Beason United Methodist Church, 1544 Walnut Ave., Beason, IL 62512.