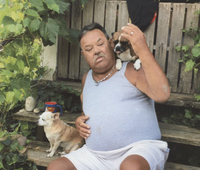 RB Winton Harrison, Jr., 62, of 608 Murray Street, died Sunday July 31, 2022, in UPMC Chautauqua. A lifelong Jamestown resident, he was born April 26, 1960, a son of the late RB Winton Harrison, Sr., and Hazel Jimerson. He was employed by Phoenix Metal as a metal fabricator. He was a registered member of the Seneca nation and its Turtle Clan. An avid fan of the Buffalo Bills, he enjoyed fishing and watching wrestling. Surviving are two sons Gabe Harrison of Jamestown and Brian Harrison of Lakewood; five grandsons Damon, Corey, Domnick, Samuel and Adam Harrison; three great grandchildren Nation, Natalia and Kailyn; sister Nona (Charles) Meacham of Jamestown; brother Douglas (Michelle) Harrison of Jamestown and his nephew and best friend Christopher Meacham of Jamestown. Besides his parents he was preceded in death by a sister Diane Seekins and brother Richard Harrison. Friends will be received from 11 am to 1 pm Wednesday in the Lind Funeral Home followed by a graveside service at Hillside Haven Cemetery, Steamberg. You may leave words of condolence at www.lindfuneralhome.com.