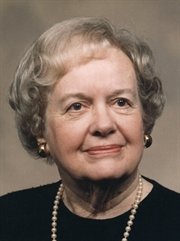 Obituary of Norma B. Broadhead

A resident of Jamestown for more than 60 years, Norma Broadhead died on December 25 at home surrounded by her family. She was born on March 2, 1920 in Woodbury, Connecticut to the late Thomas Fayle and Elizabeth Vaughan Butler. Norma was a graduate of the Mitchell School of Woodbury, majoring in child psychology and early education. She was responsible for issuing war bonds for Bell Aircraft during World War II. Norma was an active member of St. Luke's Episcopal Church for more than 50 years, served for many years on the Warner Home Board of managers and was a lifelong patron of the James Prendergast Library. She was an avid reader and bridge player. Norma moved to Jamestown in 1946 and through the 1950s and 1960s was the June Cleaver of Meadow Lane. She was a magnet for her daughter Suzanne's friends, being the Mom all the kids wanted to be around. She taught Suzanne and her friends the essentials of life-how to jump rope, how to play kickball, and how to build leaf houses. She and her husband built a homemade ice rink each year and it was Norma's job to refresh it with the hose each cold, cold morning. When her husband Don got sick, Norma began a career at Marine Midland Bank. A generation of Jamestown bank tellers learned their craft from Norma. She nursed her second husband, Bill Winslow, through a lengthy last illness. Norma was reborn in the 1990s by her courtship with and marriage to Al Broadhead. Al wined and dined Norma and they ran around and traveled like a couple in their twenties during their 12 years together. Al was a great addition to Norma's family who everybody adored and loved very much. Survivors include her husband Almet N. Broadhead, daughter Suzanne Elizabeth Curtis Ravel and son in law Stephen Ravel of Austin, Texas; stepdaughter Allison Broadhead Saxe of New York City; stepson Skip Broadhead and step daughter in law Carol McKinnon of Tacoma Washington, twin grandchildren Rachel and Benjamin Ravel of Austin who celebrated their Bnai Mitzvot on November 14 of this year. Also surviving are twin step grandchildren Adam and Madeleine Saxe of New York City, step grandchildren Elizabeth and Sarah Broadhead and a number of nieces and nephews. Besides her parents, Norma was predeceased by her first husband Don Allen Curtis, to whom she was married from 1946 until his death in 1975, her second husband William Winslow whom she married in 1980 and who died in 1995, and her sister Margery Butler Hartnett of Rancho Santa Margarita California who died in 2008. Funeral Services, including Holy Eucharist, will be held at 1pm on Sunday, December 27 at St. Lukes Episcopal Church 410 N. Main Street in Jamestown. A reception at which the family will receive visitors will follow the service. In lieu of flowers, Norma asked that she be remembered with memorials to St. Lukes Episcopal Church 410 N. Main Street, Jamestown, N.Y. 14701, to the James Prendergast Library, 509 Cherry Street Jamestown, N.Y. 14701, or to Hospice Chautauqua County, 2 W. Fairmount Ave, Lakewood, N.Y. 14750. Norma and her zest for life will be missed by many.
To plant a tree in memory of Norma Broadhead, please visit Tribute Store
Plant a Tree
Print
Share A Memory
Plant a Tree