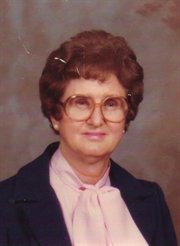 Meda M. Abbey, 90, of Bay City, MI, formerly of Kennedy, NY, died Saturday December 12, 2009 in Bay City Medical Center. She was born February 3, 1919 in Detroit, MI, a daughter of Ernest and Hannah Enlign Sharp. After moving back to Michigan in 1970, she was employed by General Motors in Bay City. While living in the Jamestown area she was employed by the former Chautauqua Hardware. She attended First Baptist Church of Essexville, MI and was a member of United Auto Workers. Surviving are two sons Wayne (Sue) Abbey of Kennedy and Durwood (Debra) Abbey of Meadville, PA, five grandchildren Brent Abbey of Falconer, Derek Abbey of Kennedy, Ryan Abbey of Erie, PA, Brook Abbey of Joppa, MD and Laura Abbey of Meadville, three great grandchildren Seth, Nathan and Alexis Abbey, three sisters Dorothy Latocki, Jeanette Bosco and Betty Cieslinski all of Bay City and a brother Harlan Sharp of Austin, TX. She was preceded in death by her husband Wesley Abbey who died April 13, 1962, five sisters and four brothers. A memorial service will be held at 2:30 p.m. Tuesday December 29, 2009, in the Lind Funeral Home. Inurnment will be in Randolph Cemetery. Memorials may be made to the Kennedy Free Library.
To plant a tree in memory of Meda Abbey, please visit Tribute Store
Plant a Tree
Print
Share A Memory
Plant a Tree