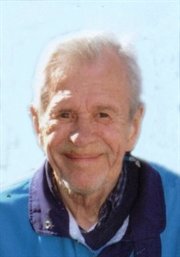 Laverne C. "Vern" Nelson, 80 of 3210 Dutch Hollow Road, Bemus Point, died unexpectedly at 7:18 p.m. Saturday (November 28, 2009) in WCA Hospital. A Jamestown native, he was born March 28, 1929, the son of the late Rudolph and Minnie Hall Nelson. Vern was a US Army veteran, serving in Korea and was a graduate of Utica College where he received his degree in accounting and finance. In earlier years, he traveled throughout the US and Canada, working as a federal examiner for Commercial Credit. After returning to Jamestown, he worked as an accountant and office manager for several auto dealerships, retiring from Lake County Dodge. He was a member of the First Baptist Church, serving as treasurer for many years; VFW Post 557; War Vets; Am Vets; Viking Lodge; Lakewood Rod and Gun Club; and the Ira Lou Spring Post 149 American Legion. Vern will be remembered for his inquisitive mind, wide variety of interests, and sense of humor. He is survived by his son, Jonathan Nelson of Warren, PA; two nieces, Judy Cashmore and Terry (Joe) Chudzicki both of Jamestown; a nephew, John A. (Tagie) Pollock of Columbia, MD; several great nieces and great nephews; two brother in laws; William "Bill" Samuelson; John (Carol) Samuelson; two sister in laws; Johann Samuelson, and Marilyn Reynolds, all of Jamestown. Besides his parents, he was preceded in death by his wife, Natalie Ann Samuelson Nelson who died December 11, 2007; and his sister, Gladys Pollock who died March 31, 2009. The funeral service will be held at 11 a.m. Thursday in the Lind Funeral Home. The Rev. Raymond McGinnis, retired pastor, will officiate. Burial with full Military Honors will be in Lake View Cemetery. Friends will be received from 2 to 4 and 7 to 9 p.m. Wednesday in the funeral home. Memorials may be made to the Fluvanna Fire Department, 3536 Fluvanna Ave Ext, Jamestown, NY 14701; or to a charity of choice.
To plant a tree in memory of Laverne Nelson, please visit Tribute Store
Plant a Tree
Print
Share A Memory
Plant a Tree