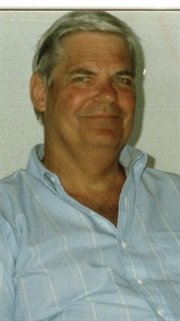 Obituary of John A. Palmer

John A. Palmer, 80, of 225 Locust St., Lakewood, died Thursday November 26, 2009, in his home. A native of Bradford, PA, he was born September 30, 1929, a son of Ernest and Mildred Swanson Palmer. He was a 1947 graduate of Bradford Area High School and later earned a bachelor's degree in finance and accounting from St. Bonaventure University. He was a veteran of the US Air Force serving as a pilot. Prior to his retirement he was employed by United Refining, Warren in the accounting department. He was a member of the Free and Accepted Masons, Consistory, Shrine and its Drum and Bugle Corps, Lakewood Memorial Post #1286 and the Lakewood Rod and Gun Club where he served on the board of directors and held every office at least twice. In earlier years he loved to hunt and fish. He was an avid fan of the Buffalo Bills and Notre Dame Football. Surviving are his wife the former Gloria Borczon, whom he married March 5, 1966, three children Julie and her husband Christopher Hayes of Lakenheath Air Force Base, England, Lynn and her husband Gordon Bailey of Jacksonville, FL and John and his wife Jennifer Palmer of Lakewood, seven grandchildren Joseph, Ellen, Paul and Owen Hayes all of England and Cecilia, Fiona and Palmer Bailey of Jacksonville and two nephews Dr. Thomas and his wife Sylvia Bathrick of South Bend, IN and William Bathrick of Englewood, FL. He was preceded in death by a grandson Christopher Alan Hayes, a sister Ernestine Louise Bathrick and a nephew James Bathrick III. The funeral will be held at XX Tuesday in the Lind Funeral Home. Burial will be in Sunset Hill Cemetery. Friends will be received from 2-4 and 7-9 p.m. Monday in the funeral home. Memorials may be made to Shiners Hospital for Children, 1645 W. 8th St., Erie, PA, 16505-5097 or Hospice of Chautauqua County 20 W. Fairmount Ave. Lakewood, 14750
To plant a tree in memory of John Palmer, please visit Tribute Store
Plant a Tree
Print
Share A Memory
Plant a Tree