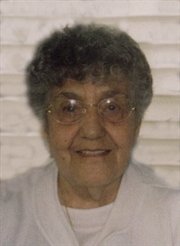 Sarah Mazzone VanEvery, 86, of 136 Greenhurst Village, died Sunday October 4, 2009, in her home. She was the widow of the late Walter H. "Moose" VanEvery, whom she married March 3, 1956 and who died January 21, 2000. She was born September 30, 1923, in Jamestown, a daughter of the late Joseph and Sarah Guarneri Mazzone, Sr. She attended Jamestown area schools and prior to her retirement was employed by the former Crescent Tool Company as a tool maker. She enjoyed going to the casino with her special friend Betty. She will be sadly missed by her family. Surviving are two sisters Dominica "Dolly" Deppas of Jamestown and Lucy (Glenn) Cook of Warren, PA and several nieces, nephews, great nieces and nephews and great great nieces and nephews. Besides her husband and parents she was preceded in death by six brothers Samuel, Frank, Thomas, Joseph, Phillip and James Mazzone and a sister Antoinette "Doe" Bush. The funeral will be held at 11 a.m. Thursday in the Lind Funeral Home. Burial will be in Sunset Hill Cemetery. Friends will be received from 3-6 p.m. Wednesday in the funeral home. In lieu of flowers memorials may be made to a charity of choice.
Print