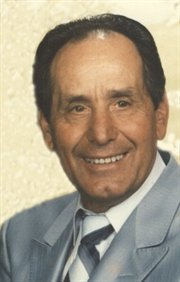 Peter Caprino, Sr. 87, of 110 Pennsylvania Ave. passed away unexpectedly on Thursday October 1, 2009. An area resident since coming to the United States in 1947, he was born June 22, 1922 in Tortorici Sicily a son of the late Anthony and Antonina Gullotti Caprino. During his younger years in Sicily he had served with the Italian Army. Since coming to Jamestown he began working with his brothers Joe and Al at the former Caprinos TV and Appliance Store while at the same time going into business for himself as a self employed barber. He owned and operated Caprino's Barber Shop for over 70 years working up to and during the day of his death. He was currently the longest standing business merchant in downtown Jamestown. He was a communicant of St. James Catholic Church and was an avid golfer as a member of the Chautauqua Golf Club for over 40 years. In earlier years he was a member of the local barbers union. He will be remembered as a loving and caring father and grandfather who loved spending time with his extended family and many friends. He truly lived life to the fullest each day and brought much joy to everyone around him and was a devoted friend to all who knew him. Surviving are a daughter Linda (Bob) Darling, a son Peter Caprino, Jr. both of Jamestown, three grandchildren Scott Darling of Buffalo, Laurie Darling of Houston, TX, Kevin Darling of Jamestown. Besides his parents he was preceded in death by his wife the former Josephine C. Foti Caprino whom he married November 18, 1950 and who died January 9, 1996 and three brothers, Joseph, Albert and Anthony Caprino. A Mass of Christian Burial will be celebrated at 10:00 am Monday in St. James Catholic Church. The Rev. John L. Kuhlmann will be celebrant. Burial will be in the Holy Sepulchre Cemetery. Friends will be received from 2-4 &amp; 7-9 pm Sunday in the Lind Funeral Home where a Christian Wake Service will be led at 6:45 pm Sunday by Deacon Michael Lennon of St. James Catholic Church.
Print