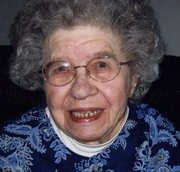 Obituary of Helen B. Osborne

Helen B. Osborne, 90, a longtime resident of Cherry Lane in Lakewood, died at 4:55 a.m. Sunday, September 27, 2009 in WCA Hospital. She was the widow of Robert M. Osborne, who she married August 26, 1950 and who died following an automobile accident on July 23, 1990. Helen was born January 4, 1919 on the family farm in Brockport, Elk County, PA, the daughter of the late Emil and Minnie Lawrence Brumberg. A 1937 graduate of the Horton Township School in Brockport, she graduated in 1941 from the WCA Hospital School of Nursing and worked as a head nurse at WCA for several years. Helen was a member of Lakewood United Methodist Church where she was active in the Friendship Circle, former United Methodist Women, Tuesday Morning Bible Study Group and the Church Women United. She was also a member of the WCA Alumni Nurses and the Disabled American Veterans Auxiliary. Helen was an avid letter writer who expressed her love to family and friends with frequent cards and letters. Even in her last days she was speaking of others to whom she wished to send a note. Helen faced life with a cheerful spirit and a smile to the end. Surviving are two daughters, Kathleen L. Robinson and Marilyn J. Osborne, both of Jamestown; two granddaughters, Rebecca (Jason) Mayo of Rochester and Laura Lucas of Canandaigua; five great grandchildren, Isaiah, Jedediah, Andrew, Emma and Elijah; several cousins, including Ted Johnson of Naples, FL, Tom Burkett of Monroeville, PA, Scott Brumberg of Chevy Chase, MD and several cousins in Sweden. Also dear to her heart were many nieces and nephews including the Wellman family from New Hampshire, Janet and Rod Snow of Bellingham, WA and Lynda and Brian Kolstee of Jamestown. The funeral will be held at 11:00 a.m. Thursday at Lakewood United Methodist Church. The Rev. Violet A. Davidson will officiate. Burial will be in Sunset Hill Cemetery. Friends will be received from 5 to 8 p.m. Wednesday in the Lind Funeral Home, and for one hour prior to the service in the church Thursday. Memorials may be made to Lakewood United Methodist Church, 164 Shadyside Ave., Lakewood, NY 14750; or the Chautauqua Blind Association, 510 W. Fifth St., Jamestown, NY 14701.
Print