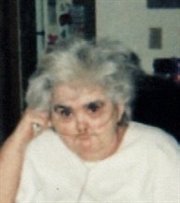 Sandra J. Nixon, 67, died at 4:10 p.m. Wednesday (September 16, 2009) in the Heritage Park Rehab and Skilled Nursing Facility. A Jamestown resident most of her life, she was born May 10, 1942 in Olean, NY the daughter of Virginia Yaudes. For many years, Sandra worked at the Resource Center. She enjoyed playing cards, plastic canvass and coloring; and spending time with her family and friends. Surviving besides her mother of Olean are, three daughters, Tina Blood and Irene Williams both of Jamestown; Paula Williams of PA; three grandchildren, Erica (Jason) Skinner; Stephanie Skinner; Jonathan Williams Sr., all of Jamestown; three great grandchildren, Kobie Skinner; Jonathan Williams Jr.; and Zachary Williams all of Jamestown; a brother, Paul Capozci of CA; and two sisters, Charlene Dugrener and Sharon (Mark) Friel both of Olean. She was preceded in death by her husband Cleo H. "Curly" Nixon; her step father, John Yaudes; two sons, Harry and Dale Williams; and a brother Jack Yaudes. The funeral service will be held at 2 p.m. Monday in the Lind Funeral Home. The Rev. Gerald A. Haglund will officiate. Burial will be in Lake View Cemetery. Friends will be received for one hour prior to the service Monday in the funeral home. In lieu of flowers, memorials may be made to a charity of choice.
Print