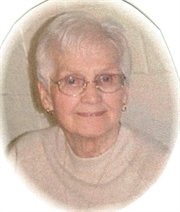 Dorothy M. "Dot" Anderson, 94, of 4514 Route 60, Gerry died Thursday, September 10, 2009 at Heritage Village Rehab and Skilled Nursing. She was born in Jamestown on August 14, 1915, a daughter of the late John and Hulda Shellgren Bloomdahl. A resident of Celoron for over 50 years, she was the widow of Herbert L. Anderson, whom she married August 17, 1935 and who died October 3, 1998. Dot belonged to Fluvanna Community Church and was a 20 year member of the Celoron Fire Department Auxiliary. Her greatest love was time spent with her family, especially her grandchildren. She also enjoyed bird watching, reading and for many years, camping. She is survived by a son, Jon H. (Janice) Anderson of Gerry; five grandchildren: Julie (Roger) Zahm of Gerry, Jon (Kelly) Anderson Jr. of Mayville, Shelly Cordosi of Jamestown, Lori (Mike) Ducat of Lakewood and Sherry Barlow of Sinking Springs, Pa.; eleven great grandchildren: Ryan (Misty) and Randy Zahm, Christian and Olivia Anderson, Kody, Kasey and Kurry Cordosi, Audrey Ducat and Erika, Thomas and Kaylee Barlow; two great great grandchildren, Grace and Grant Zahm; and a sister, Jeanne Abrahamson of Fairport, NY. In addition to her husband, she was preceded in death by a son, Steven D. Anderson; four sisters: Lillian Vincent, Helen Jones and June and Margret Bloomdahl; and a brother, Berger Bloomdahl. A memorial service will be held at 2:00 p.m. Friday, September 18th in the Lind Funeral Home. The Rev. Dayle F. Keefer will officiate. Inurnment will be in Lake View Cemetery. Visitation will not be observed. Memorials may be made to the James Prendergast Library, 509 Cherry St., Jamestown, NY 14701.
Print