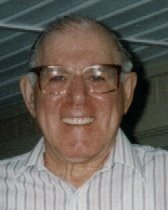 Harold T. Perry, 83, formerly of 127 Cook Ave., passed away to be with the Lord Thursday (September 10, 2009) at the Erie VA Medical Center following a short illness. He was born in Nanticoke, Pa. on February 23, 1926, a son of the late Arthur and Mae Perry. A World War II veteran in the US Army, he served under General Patton during the Battle of the Bulge. He was captured by the Germans in Belgium, later rescued near Stuttgart, Germany and received the Bronze Star. Harold was employed for 44 years by Hope's Windows. He is survived by his wife, the former Rita D. Faux, with whom he celebrated their 60th wedding anniversary this past July 2nd; a daughter, Linda (Edward) Burke of LaGrange, OH; a granddaughter, Susan Nielsen of Parkdale, OR; a sister, Mary Ceci of Jamestown; and many nieces and nephews. In addition to his parents, he was preceded in death by a sister, Margaret LaPlaca and three brothers, Wilbur, George and Arthur Perry. The funeral will be held at 11:00 a.m. Monday in the Lind Funeral Home. The Rev. Donald E. Ray will officiate. Burial will be in the Fentonville Cemetery. Friends will be received from 6 to 8 p.m. Sunday in the funeral home. Donations in memory of Harold may be made to the Frewsburg Fire Department.
Print