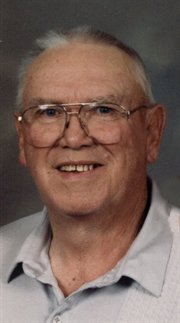 Robert Claire Ecker, Sr., 84, of Tidioute, PA, died September 10, 2009, in the home of his son in Tidioute. He was born February 27, 1925, in Ashville, NY, a son of the late Eugene and Anna Perdue Ecker. He was a WWII veteran of the US Navy serving from 1943 to 1945. Prior to his retirement he was employed by Warren Steele. For many years he worked as a diesel mechanic and truck driver. Surviving are six children Barbara Warner of Tionesta, PA, Ricky (Mary) Ecker of Westfield, Randy (Tammy) Ecker of Tidioute, Robert C. Ecker, Jr. of Tionesta, Richard (Mary Lynn) Ecker of Erie and Sherry Kehl of Wesleyville, several grandchildren, great grandchildren, nieces and nephews and two sisters Clara Blanchard of Mayville, NY and Sarah "Sally" Todaro of Jamestown, NY. He was preceded in death by his first wife Ethel Luce Ecker, his second wife Betty Hathaway Ecker, a grandson Michael Giles, five sisters Alice Eudora Lawson, Gertrude Lamb, June Phelps, Erma Ecker and Roberta Rotunda and four brothers George, Lyle, Harry and Richard Ecker. No funeral service will be observed however, the family will receive friends from 2-4 p.m. Saturday in the Lind Funeral Home.
Print