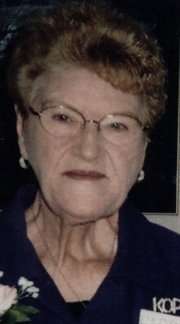 Obituary of Harriet B. Harding

Harriet B. Harding, 72, of 1904 S. Maple Ave., Ashville, died Sunday August 30, 2009 in Cleveland Clinic. Born February 7, 1937, in Carter Hill, PA, a daughter of Harry and Esther Morris Burton. She graduated from Corry High School in 1955, and earned an associate's degree from JCC. She was a payroll clerk for the Board of Education in Jamestown, until her retirement in 1998. As a communicant of Holy Apostles Parish, SS Peter and Paul Catholic Church where she was also an admired soprano of the choir for 36 years, and for a time served as a cantor. She was an invaluable member and inspirational leader of TOPS Chapter 721, Jamestown. She was crowned Queen in 2001. A valuable community volunteer, she served as treasurer for the Golden Agers. She was a dedicated and wonderful wife, mother, grandmother and great grandmother, who enjoyed cross-stitching and reading. Surviving is her husband Richard Harding, whom she married May 28, 1960, and five children: David (Brenda) Harding of Ashville, Kevin (Sally) Harding of Pleasant Valley, NY, Valerie Harding of Buffalo, Charles (Karen) Harding of Falconer and Thomas Harding of Findley Lake, NY, nine grandchildren Carl, Timothy, Justin, Jill, Timothy, Meaghan, T. Gage, Zoe and Alta Harding two great grandchildren Keira and Angela Harding, two brothers James Burton of Corry and Charles Burton of Tennessee and a sister Barbara Deihl of Corry. A Mass of Christian Burial will be celebrated at 10 a.m. Wednesday in SS Peter and Paul Catholic Church. Burial will be in Holy Cross Cemetery. Friends will be received from 4-7 p.m. Tuesday in the Lind Funeral Home, where a Christian Wake Service will be led at 3:45 p.m. Memorials may be made to The Cleveland Clinic Foundation, Pulmonary Hypertension Study, PO Box 931517, Cleveland, OH 44193-1655, or Tops Chapter 721, Jamestown.
Print