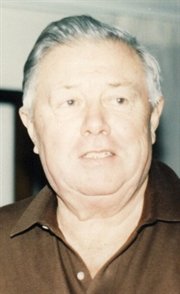 Harvey H. Lauritson, Jr., 86, of 30 Rice Ave., Frewsburg, died Wednesday August 5, 2009, in Golden Living Center-Kinzua, Warren, PA. He was born July 8, 1923, a son of Harvey and Jenny Weaver Lauritson, Sr. He was a WWII veteran of the US Army and was a self employed plasterer for many years. He was a member of the Veteran of Foreign Wars, Samuel Derby Post #556 American Legion and was a 50 year member Bricklayers and Allied Craftsman Local #3. Surviving are his wife the former Martha Seekings, two sons Harvey O. Lauritson of Frewsburg and George Lauritson of St. Roberts, MO, five grandsons David, Christopher, Ty Lauritson, George Lauritson, Jr. and Richard Hayes, eleven great grandchildren, three great great grandchildren and a sister Grace Woodring of Chandler, AZ. He was preceded in death by a daughter Barbara Crissman. The funeral will be held at 1 p.m. Sunday in the Lind Funeral Home. Burial will be in Lake View Cemetery. Friends will be received from 5-8 p.m. Saturday in the funeral home.
Print