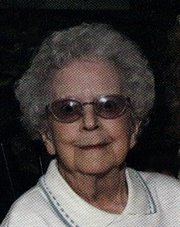 Obituary of Esther I. Ellis

Esther I. Ellis, 97, formerly of Chautauqua Colony Apartments, died at 9:20 p.m. Monday (August 3, 2009) in the Heritage Green Rehab and Skilled Nursing Facility. She was born May 23, 1912 in Scandia, PA the daughter of Henry Olaf and Emma Louise Johnson Olson. She had been employed at the former T. James Clarke Box Factory. Esther enjoyed playing BINGO, and watching baseball. Surviving are three grandchildren, Chad, Tricia, and Daniel Ellis; two great grandchildren; and several nieces and nephews. She was preceded in death by her first husband, Ben Lundgren whom she married in 1939 and who died in 1945; her second husband, Lawrence Ellis whom she married in 1947 and who died in 1964; a son, Dennis M. Ellis who died in 1997; six sisters, Edith Johnson, Ruby Rasmussen, Lillian Pfancook, Alyce Nelson, Marion Lundquist, and Mildred Olson; and seven brothers, Harris, Harry, Rudolph, Norman, Elton, Herbert, and Milton Olson. The funeral service will be held at 1:00 p.m. Saturday in the Lind Funeral Home. The Rev. Donald E. Ray will officiate. Burial will be in Lake View Cemetery. Friends will be received from 11:00 a.m. to 1:00 p.m. Saturday in the funeral home. Memorials may be made to Hospice Chautauqua County 20 W Fairmount Ave., Lakewood, NY 14750.
Print