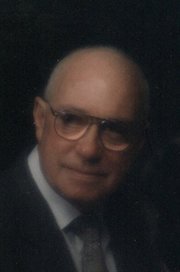 Samuel G. Rashbrook, 82, formerly of 178 High Acres Bemus Point, died at 5:00 a.m. Monday (August 3, 2009) in the Heritage Green Rehab and Skilled Nursing Facility. A lifelong area resident, he was born April 9, 1927 in Jamestown the son of Samuel G. Rashbrook and Irma Haskell Rashbrook Barrett. Samuel was a US Army Veteran of WWII. For 46 years, he was employed at Blackstone, retiring as superintendant. He was past president of the War Vets and a former member of the American Legion. Surviving are his wife of 47 years, Evelyn B. Zimmerman Rashbrook; two sons, Rev. Jeffrey C. Crawford (Bev) of Fairport, NY; Douglas M. Rashbrook (Brenda) of Ellery Center, NY; a daughter, Connie L. Bielata of Ashville, NY; nine grandchildren, Jack M. Bielata; Jeffrey J. Bielata; Jayme L. Harding; Jed T. Crawford; Jeanna C. Rouland; Joy E. Crawford; Joel M. Rashbrook; James D. Rashbrook; Jason M. Rashbrook; ten great grandchildren; and a sister, Lois Carlson of Colorado. Besides his parents, he was preceded in death by a daughter, Paula Sue Rashbrook who died January 22, 1998. The funeral service will be held at 3:00 p.m. Friday in the Lind Funeral Home. His son, Rev. Jeffrey C. Crawford will officiate. Burial will be in Bemus Point Cemetery. The family will receive friends for one hour prior to the service Friday in the funeral home. Memorials may be made to a charity of one's choice.
Print