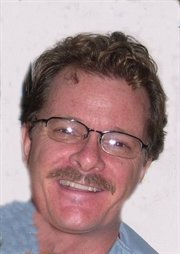 Robert F. Johanson, 50, of Clearwater, FL, died unexpectedly on Saturday, July 11, 2009. A native of Jamestown, Rob was born on December 24, 1958 to Fred J. and Elsie Jane (Gordon) Johanson. He was a graduate of Jamestown High School Class of 1977 and attended Thiel College. He was a partner in The Johanson Agency, Inc. until 1990, at which time he relocated to Florida, where he worked for Zep Inc. and Priority Paging. In Jamestown, Rob belonged to the Viking Male Chorus, the Norden Club of Jamestown Inc., was an active member of Sylvan Lodge F &amp; AM in Sinclairville, NY and the Harley Owners' Group (HOG). He enjoyed sports and was an avid fan of the Cleveland Browns. As a great lover of animals, Rob rescued and gave shelter to many abandoned cats over the years. Surviving are a sister, Deborah J. Oram of Uvalde, TX; a brother, Daniel G. (Rosanne) Johanson of Jamestown, NY; two nephews, Lars D. (Melissa) Johanson of Baltimore, MD and Erik C. Johanson of Orchard Park, NY; and two nieces, Lindsay G. Oram (Temple) Ratcliffe of Helotes, TX and Ashleigh M. Oram (Michael) Roscishewska of New York, NY. He also leaves behind many friends and four beloved pet cats. He was preceded in death by his father, who died in 1999 and his mother, who died in 2007. The family will be available to greet friends at the Lind Funeral Home on Saturday, July 25th from 10:00 a.m. to 12:00 noon. At Rob's request no funeral service will be held. In lieu of flowers, memorials may be made to the Chautauqua County Humane Society, 2825 Strunk Road, Jamestown, NY 14701, or The Salvation Army, 83 South Main Street, Jamestown, NY 14701.
Print