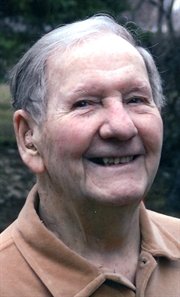 Paul L. Lilly, 96, of 233 Buffalo St., died Tuesday June 16, 2009 in Heritage Green Rehab and Skilled Nursing. A Jamestown resident all of his life, he was born March 27, 1913, a son of Harry and Elizabeth Beaver Lilly. He was a 1931 graduate of Jamestown High School and prior to his retirement was employed by the City of Jamestown as a fireman. He had also worked for Kenneth Fosberg Company as a printer and ran the Jamestown City Credit Union for many years. He was a communicant of Holy Apostle's Parish St. John Catholic Church and was a member of Lakewood Rod and Gun Club, the Morton Club, Elks Lodge and Celtics. He was a lifetime member of the Eagles Club and a former member of the Knights of Columbus and Maplehurst Country Club He was an avid golfer until age 91, and avid bowler until age 94 and for 45 years was organizer of the annual Firemen's Bowling Tournament. Surviving are two daughters Nancy (Richard) Barkstrom of Jamestown and Jane (Ronald) Schulz of Hollywood, FL, four grandchildren Deborah (David) Flavin of Baltimore, MD, Jeffrey (Una) Barkstrom of Jamestown, Jennifer (Chad) Hodder of Fort Lauderdale, FL and Jessica (Wayne) Palomino of Tamarac, FL and three great grandchildren Abby and Hallie Hodder and Emily Flavin. He was preceded in death by his wife the former Anne C. Sander, whom he married September 23, 1939 and who died May 14, 1972, an infant daughter Maxine Elizabeth Lilly and a dear friend Pearl Ahlstedt. A Mass of Christian Burial will be celebrated at 10 a.m. Friday July 3, 2009 in St. John Catholic Church. Burial will be in Holy Cross Cemetery. Friends will be received fro 2-4 and 7-9 p.m. Thursday in the Lind Funeral Home. Memorials may be made to Emily's Peeps c/o Juvenile Diabetes Research Foundation or Hospice of Chautauqua County, 20 W. Fairmount Ave., Lakewood, NY 14750.
Print