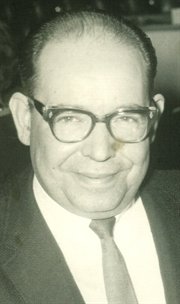 Murray L. Paul, 85, of 516 Palmer St. died at 9:05 pm. Friday (June 12, 2009) in the Heritage Village Rehab and Skilled Nursing Facility. A lifelong area resident he was born August 20, 1923 in Jamestown, NY a son of the late George L. and Mary Murray Paul. He was a veteran of the U.S. Army serving during World War II from January 29, 1943 to February 28, 1946. During his tour of duty he had received the American Theater Ribbon, the Good Conduct Medal, the Meritorius Unit Award and the Victory Ribbon. Prior to his retirement he was a District Manager for the Fuller Brush Company in the Jamestown area for 17 years. He had also operated a second hand store on Baker St. for several years. In earlier years he had owned and operated several used car lots in the Jamestown area. He had also been a member of the Samuel Derby Post # 556, American Legion, Frewsburg. Surviving are four sons Richard A. Paul, Michael L. Paul, James A. Paul all of Jamestown, Thomas J. Paul of Evans, GA., a daughter Karen Redman of Panama, eleven grandchildren and several great grandchildren. He is also survived by two step daughters and several step grandchildren and step great grandchildren. A private family service will be held in the Lind Funeral Home. Friends will be received from 6-8 p.m. Wednesday in the Lind Funeral Home. Burial will be in the Lake View Cemetery. Memorials may be made to Hospice Chautauqua County, 20 West Fairmount Ave., Lakewood, NY 14750.
Print