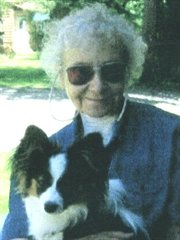 Ann P. Truitt, 79, of 66 N. Alleghany Ave. WE, died peacefully on Sunday, June 7, 2009 in her home, surrounded by her family. She passed into the arms of Jesus in whom she had placed her trust. She was the widow of David B. Truitt whom she married September 1, 1950 and who died March 3, 1998. An area resident most of her life, she was born in Boston, MA on October 6, 1929, a daughter of the late Donald and Evelyn Brooks Pierson. She graduated from Jamestown High School in 1947. Ann had been employed as a billing supervisor by the former Blue Cross and Blue Shield in Jamestown and in earlier years, together with her late husband, operated the Fluvanna Grocery. A member of Holy Trinity Lutheran Church, she also belonged to the Lost Cord Club and AA. Ann and her family have been most thankful for the wonderful support and encouragement shown by her AA friends, church family, and Hospice nurses, and for Cindy Fransen's continued care for Ann's dog and faithful companion, Trotter. Surviving are two sons: Douglas (Billie) Truitt of Windsor, CT and Chuck (Mary) Truitt of Factoryville, PA; five grandchildren: Molly Truitt of Windsor, and Martha (Justin) Jeffrey and Nathan (Leah), Timothy and David Truitt, all of Pennsylvania; a great-granddaughter Ally Truitt; a sister, Lorinda (Ted) Valone of Jamestown; two sisters-in-law, Jacqueline Pierson of Orange Park and June Truitt of Rhode Island; and nieces and nephews Beth (Robert) Olson of Jamestown, Jeff (Bridget) Valone of Jamestown, Chris (Lisa) Valone of Conway, SC, David (Maryann) Pierson of Omaha, NE, and Tara (Jason) Seaward of Folkston, GA. In addition to her husband and parents, she was preceded in death by a brother, Peter Pierson. A memorial service will be held at 11 a.m. Tuesday in Holy Trinity Lutheran Church. The Rev. Alison L. Leitzel will officiate. Inurnment will be in Fluvanna Cemetery. Friends will be received for one hour prior to the service at church and following the service in Anderson Hall. In lieu of flowers, memorials may be made to Hospice Chautauqua County, 20 W. Fairmount Ave., Lakewood, NY 14750; or to Holy Trinity Lutheran Church, 825 Forest Ave., Jamestown, NY 14701. Arrangements are by the Lind Funeral Home.
Print