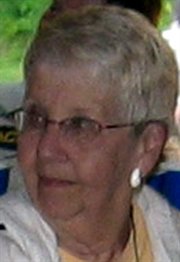 Beatrice M. "Betsy" Peterson, 83, of 146 Marion St. died unexpectedly at 2:05 p.m. Sunday (May 24, 2009) in her home. A lifelong area resident she was born November 21, 1925 in Jamestown, NY a daughter of the late Roger K. and Beatrice Swanson Mason, Sr. She was a 1943 graduate of the former Celoron High School. Before her retirement she was employed as a teacher's assistant for the Celoron Elementary School and in earlier years had worked for Girton's Florist for several years. She was previously affiliated with the First Baptist Church of Jamestown and was very active with the reunion committee for the Celoron High School annual school reunion. She was also a volunteer for the St. Susan's Soup Kitchen. Surviving are a daughter Sharon Swanson of Durham, NC, two sons Roger Swanson of Leland, NC, Joel Peterson of Tucson, AZ, five grandchildren Jennifer Swanson Heath of Sinclairville, NY, Christopher J. Swanson of Hickory, NC, Katrina Swanson Schemmel of Apex, NC, Michael T. Swanson of Jamestown, NY, Elisabeth L. Forsberg of Durham, NC five great grandchildren Meghan and Shannon Heath of Sinclairville, Madison Reep, Emily, and Matthew Swanson all of Hickory, NC and a sister Barbara Mason Kost of Jamestown, NY. She was preceded in death by her husband Marshall R. Peterson who died in 1977, a brother Roger K. Mason who died November 3, 2002 and a grandson Jacob Reuben Forsberg who died November 10, 2006. The funeral will be held at 4:00 p.m. Thursday in the Lind Funeral Home. The Rev. Donald E. Ray, retired chaplain of W.C.A. Hospital will officiate. Burial will be in the Fluvanna Cemetery. Friends will be received for one hour prior to the service. Memorials may be made to the Falconer Public Library, 101 West Main St., Falconer, NY 14733
Print