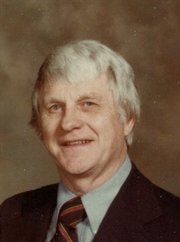 Sherwood C. "Bud" Carlson, 85, of 1 Wembley Drive WE Jamestown, NY and Hobe Sound, FL, passed away at 4:15 a.m. Friday (May 22, 2009). He was born June 18, 1923 in Jamestown, NY the son of Blaine O. and Alida Anderson Carlson. He graduated from Jamestown High School in 1941. He owned and operated the Sherwood Restaurant (formerly the Polka Dot Restaurant) for 35 years, and was previously a Real Estate Broker. He was a World War II Veteran serving as a Staff Sgt. in the US Army Air Force for 4 years. He served with the 8th Air Force 52nd Fighter Control Squadron 31 months, ETO. He participated in air sea rescue of over 1000 servicemen shot down in the English Channel and North Sea. He was a member of Holy Trinity Lutheran Church and Ira Lou Spring Post 149 American Legion. He enjoyed listening to jazz, the NY Yankees, and trout fishing. He is survived by his wife Beverly Lane Carlson, two sons, Blaine E. "Buddy" Carlson, Timothy C. Carlson, daughter Anne Elizabeth Carlson, two grandchildren, Gunnar Blaine and Emma Lane Carlson, all of Jamestown; a brother, Robert V. Carlson of Jamestown; and a sister, Beverly C. Stoops of Bowie, MD. Besides his parents, he was preceded in death by his son Thomas Lane Carlson in 1987. He was a devoted father and loving caregiver to his daughter Anne, who was seriously injured in a boating accident in 1985. The funeral service will be held at 1 p.m. Tuesday in the Lind Funeral Home. The Rev. Alison L. Leitzel, pastor of Holy Trinity Lutheran Church will officiate. Burial with full Military Honors will follow in Sunset Hill Cemetery. The family will receive friends from 2 to 5 p.m. Monday in the funeral home.
Print