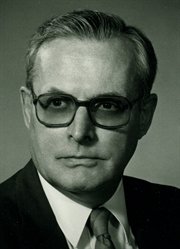 Louis T. "Ted" Christian, 82, of 2 Miller Place, Cassadaga, died at 1:38 a.m. Friday (May 22, 2009) in his home. He was born March 23, 1927 in San Francisco, CA, the son of the late Robert C. and Dorothea Miller Christian. Ted was a 1944 graduate of Bennett High School in Buffalo and served in the US Navy from 1945 to 1946. He also attended Cornell University. An employee of Marine Midland Bank since 1957, he retired in 1989 as Branch Manager of the Westfield Bank Office. He was a member of Immanuel Lutheran Church in Jamestown, as well as the Vikings Lodge #65. Ted will be remembered as a 'family man' in the truest sense of the word. Surviving is his wife, Marilyn Holm Christian, whom he married September 18, 1948; three sons: Douglas (Vickie Thompson) Christian of Cassadaga, David (Michelle) Christian of Bel Alton, MD and Darrel (Susan) Christian of Jamestown; six grandchildren: Michael (Julie), Timothy (Michelle Czekanski), Andrew, Brittany, Geoffrey and Heather Christian; and three great-grandchildren, Skyler, Gavin and Madison Christian. In addition to his parents, he was preceded in death by a sister, Susanne Foster. The funeral will be held at 11:00 a.m. Tuesday in the Lind Funeral Home. The Rev. John Saraka will officiate. Burial will be in Lake View Cemetery. Friends will be received from 4 to 6 p.m. Monday in the funeral home. In lieu of flowers, memorials may be made to Immanuel Lutheran Church, 556 E. 2nd St., Jamestown, NY 14701; American Cancer Society, 6725 Lyons St., E. Syracuse, NY 13057; or the American Heart Association, P.O. Box 3049, Syracuse, NY 13220.
Print