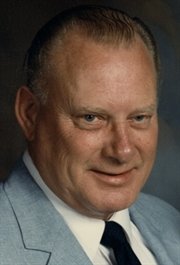 Ronald F. Swanson, 77, of 119 Trenton St., Jamestown took his last breath at 11:57 p.m. with family at his side Thursday, May 21, 2009 in his home. A lifelong area resident, he was born March 3, 1932 in Jamestown, the son of the late Floyd F. and Violet Carlson Swanson. He was the husband of the late Doris (Cree) Van Horn Swanson, whom he married November 17, 1951 and who died unexpectedly February 1, 2004. Ron was a 1949 graduate of Jamestown High School, graduating with Honors one year early. He was awarded "Boy of the Year" twice and was flown to Washington D.C. with Attorney General Robert H. Jackson to meet and be recognized by President Eisenhower. He then delivered a speech before Congress which was professionally recorded and preserved on a 78 vinyl record. From Sept. 1949 to June 1950 he attended Alfred University Extension carrying a straight (A) average and Indiana Technical College from June 1950 to Sept. 1952, graduating with an Electrical Engineering Major and Mechanical Engineering Minor. Later as an adjunct professor at Jamestown Community College, he taught "N.Y.S. Professional Engineering Review" from 1962 to 1963, "Finance and Accounting for Managers" by the American Management Assoc. in 1971 and "Planning Cash Flow" by the American Management Assoc. in 1973. As he was ineligible for the military due to an ear injury since youth, he worked as a Steeple Jack painting the tops of radio towers during high school and college. He began his career as a member of the engineering department of Crescent Tool from 1952 to 1956. He was self-employed as a consultant engineer from 1956 to 1960 and as a plant engineer for the Blackstone Corporation from 1960 to 1961. He served as vice president-treasurer and chief engineer of the Plastic Case Corporation from 1961 to 1962; assistant superintendent and plant manager of Amsco-Excel Division of American Sterilizer from 1962 to 1964; executive vice president of Premium Die and Tool Corporation from 1964 to 1976; and vice president of engineering for Oneida Molded Plastics in Oneida, NY and Clayton, NC from 1976 to 1980. Ron was co-founder, president and general manager of S. &amp; S. Enterprises in Jamestown from 1980 to 1981 and co-founder and owner, president and general manager of Universal Tooling Corporation in Gerry from 1981 until his retirement in 2003. A life member of the Society of Manufacturing Engineers since 1954 where he received a 25 year certificate in 1979, he also belonged to the Vikings Ingjald Lodge #65 and the National Rifle Association. He was a founding father of the Junior Police Association, a "ride along" program for high school boys. Ron was a devoted husband, father, grandfather, great-grandfather and a "great" friend to many. He always LOVED music and dancing and was an avid hunter and golfer, as well as enjoying swimming and the "Great" outdoors. He had played trumpet professionally and was a dance band leader. He had helped pay college expenses as a dance instructor for Arthur Murray and as a florist at the former Nelson and Butts following college. Surviving are his four sons: Craig D. (Verna) Swanson of Lakewood, Bradley S. (Diana) Swanson of Jamestown, Mark A. (Faith) Swanson of Jamestown and Stephen R. (Tammie) Swanson I of Falconer; (14) grandchildren: Sommer R. Piazza of Jamestown, Matthew A. Swanson of Lakewood, Amber L., Bradley R., and Alex S. Swanson, all of Jamestown, Leah C. Egner of Warren, PA, Joshua M. Swanson of Orlando, FL, Benjamin W. Swanson of Jamestown, Sarita Mar D.C. and Stephen R. Swanson II of Jamestown, Crystal LaRoy of San Diego, CA, Richard Allen and Ryan Short of Falconer, and Jessie Fields of Warren, PA; and six great-grandchildren: Riley, Caleb and Joshua Piazza of Jamestown, Henry and Evelyn Egner of Warren, and Cadence LaRoy of San Diego. The funeral service will be held at 10:00 a.m. Thursday at Kidder Memorial United Methodist Church. The Rev. Rick LaDue and the Rev. Jacqueline Rhodes will officiate. Burial will be in Sunset Hill Cemetery. Friends will be received from 2 to 4 and 7 to 9 p.m. Wednesday in the Lind Funeral Home. Memorials may be made to Kidder Memorial United Methodist Church, 385 S. Main St., Jamestown, NY 14701; or to Hospice Chautauqua County, 20 West Fairmount Ave., Lakewood, NY 14750.
Print