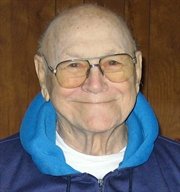 Derwood, J. Beebe, 86, of 110 Southland Ave., Lakewood died at 11:15 a.m. Thursday, May 21, 2009 in WCA Hospital. He was born October 6, 1922 in Jamestown, a son of the late Hugh and Isabelle Pye Beebe. A veteran of the U.S. Marine Corps, he served in the South Pacific during World War II. For over 40 years Derwood was employed by Falconer Metal Specialties in Lakewood, retiring as Vice President of Shipping in 1987. He had been a member of the Lakewood Memorial Post 1286 American Legion, Lakewood Rod &amp; Gun Club and Maplehurst Country Club. An avid golfer, he also enjoyed casino gambling and gaming. Surviving are seven children: Kenneth (Roxie) Beebe of Jamestown, Patricia (Rick) Page of Lakewood, Wayne (Cheryl) Beebe of Jamestown, Michael Beebe of Celoron, Mary Beth (Jerry) Muoio of Celoron, Barbara (Paul) Evanczik of Lakewood and Thomas (Rachel) Beebe of Port St. Lucie, FL; (17) grandchildren: Jason and Matt Beebe, Michael and Sam Page, Amber Erchul, Jade Barricelli, Ericka Gowan, Johanna Winton, Michele Straight, Christopher, Adam and Justin Beebe, Nicole McGrath, Robert Dalton, Samantha Muoio and Jordan and Logan Evanczik; (23) great grandchildren; and his longtime friend, Shirley Potwin of Jamestown. He was preceded in death by his wife, Marilyn Carlson Beebe, whom he married July 27, 1946 and who died June 9, 1998; a son, Jon Beebe and granddaughter, Jessica Beebe, both of whom died in 2007; two brothers, Cleo and Kenneth Beebe; and two sisters, Beatrice Barger and Bernice Johnson. The funeral will be held at 11:00 a.m. Tuesday in the Lind Funeral Home. The Rev. Violet A. Davidson, pastor of Lakewood United Methodist Church, will officiate. Burial will be in Sunset Hill Cemetery. Friends will be received from 2 to 5 p.m. Sunday in the funeral home. Memorials may be made to Hospice Chautauqua County, 4840 West Lake Road, Mayville, NY 14757.
Print