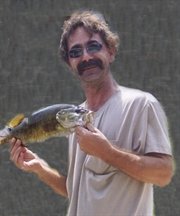 John E. Jackson, 46, of 121 Palmer St., Jamestown formerly of Tucson, AZ, died Thursday (May 14, 2009) as a result of injuries sustained in a truck accident in Sugar Grove Township, PA. A Jamestown area resident since 1995, he was born September 14, 1962 in Tucson, AZ a son of the late Clayton and Sarah Leffler Jackson. He was a graduate of Palo Verde High School in Tucson and was a 1983 graduate of the Tucson College of Business with an associate's degree in accounting. He was currently employed as a truck driver for Jones-Carroll, Inc. in Frewsburg, NY. In earlier years he had worked for Smith Transport, Inc. in Roaring Spring, PA and had also owned and operated his own long haul trucking business for several years. While living in Tucson he was a master mover with Allied Van Lines. He will be remembered as a hopelessly devoted husband, father and grandfather who will be sadly missed by his family. He loved spending time with his children and grandsons and was also an avid fisherman. Surviving are his wife and soul mate the former Karin Wilson whom he married December 26, 1984, four children Erica (Jason) Telschow of Bemus Point, NY, Freddie (Camden) Jackson of Falconer, Bonnie Jo (Danny) Corbett of Jamestown, Jason (LeAnn) Jackson of North Myrtle Beach,SC, two grandsons Jonathan Edward Telschow of Bemus Point, Gary Allen Jackson of Falconer and three brothers Paul (Pam) Jackson, Roy (Sylvia) Jackson both of Tucson, AZ, George (Judi) Jackson of Vineland, NJ. Besides his parents he was preceded in death by a sister Elaine Jackson. A private service will be held at the convenience of the family. Family and friends will be received from 2-4 p.m. Sunday in the Lind Funeral Home.
Print