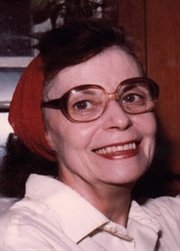 Helen C. Maguire, 86, formerly of Virginia Beach, VA, died Sunday May 10, 2009, in Heritage Green Rehab and Skilled Nursing. A Jamestown native, she was born November 29, 1922, a daughter of Conrad Harold and Allene Helgren Carlson. She was a 1941 graduate of Jamestown high School. She was a member of St. Gregory's Catholic Church, Virginia Beach, VA and the Portrait Institute of America. She had worked in a variety of retail stores in Jamestown and Norfolk, VA and also worked in the ad department at Art Metal, Inc. She was always artistic giving art lessons giving lessons to both children and adults. Following retirement she continued more fully in her art, working with oils, water colors and pencil. Her artwork was chosen to be displayed on the USS Teddy Roosevelt. She designed award winning costumes, was Ham Radio operator, enjoyed music, playing piano, organ and violin. Surviving are a daughter Karin (Kalman) Verboczki of Largo, FL, a son William (Cheryl) Peterson of Rochester, NY, eight grandchildren, several great grandchildren, a sister Marilyn (Cherril) Castle of Jamestown and several nieces and nephews. She was preceded in death by her husband Stuart Maguire, December 28, 1989, a son Robert Nordstrom, a brother William Carlson and a sister Lois Stohl. A memorial service will be held in Virginia Beach at a later date. Inurnment will be in Arlington National Cemetery. Memorials may be made to the Heritage Group, Office of Development, 3017 North Main St., Jamestown, NY 14701. Arrangements are by the Lind Funeral Home.
Print