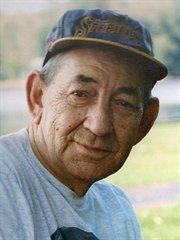 Joseph C. Singer, 76, of 51 W. Livingston Ave., Celoron, died Sunday May 10, 2009, in the Lutheran Home and Rehabilitation Center. An area resident most of his life, he was born February 19, 1933, in Altoona, PA, a son of Joseph and Hazel Wriggleman (sp?) Singer. He was a veteran of the Korean War serving in the US Navy. Most of his working years were spent in various aspects of trucking having been an owner, driver, mechanic and anything else that needed to be done. He was a member of Chautauqua County Fishermen's Club and Henry Mosher Post American Legion. He enjoyed hunting, fishing, camping and traveling and was an avid fan of the Pittsburgh Steelers. Surviving are his wife the former Patricia Hodges, whom he married September 15, 1990, four children, Sherri (Jack) Nichols and Rebecca (Ronald) Nies and Kelly Singer all of Busti, and Jolene (Raymond) Ferrie of Warren, PA, two stepchildren Lynn Terry of Jamestown and Jon Terry of Celoron, twelve grandchildren, nine great grandchildren and two brothers Merle (Sandy) Singer of Falconer and Lester (Birdessa) Singer of Mount Airy, NC. He was preceded in death by his first wife Audrey Olson Singer, whom he married February 21, 1952 and who died July 22, 1982, a daughter Debra Lynn Singer and a great grandson Chance Harper. The funeral will be held at XXXX in the Lind Funeral Home. Burial will be in the family cemetery on the Wellman Road. Friends will be received from 2-4 and 7-9 p.m. XXXX Memorials may be made to the Chautauqua County Humane Society, 2825 Strunk Road, Jamestown, NY 14701.
Print