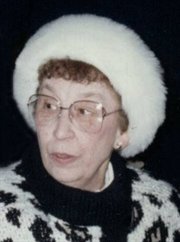 Obituary of Shirley A. Bloomquist

Shirley A. Bloomquist, 81, of 518 Willard St. Jamestown passed away at 5:55 p.m. Tuesday (October 26, 2010) in her home. A lifelong area resident she was born July 7, 1929 in Jamestown, NY a daughter of the late John P. and Ebba Rosenquist Anderson. Shirley was a 1947 graduate of Jamestown High School. Before her retirement she was employed as a receptionist for the Jamestown Police Department for 12 years. In earlier years she had worked for the former Jamestown Mutual Insurance Company, the former Art Metal, Inc. and the former Park Cleaners. She was a member of the First Lutheran Church, the Ingjald Lodge # 65 Independent Order of the Vikings, the Thule Lodge # 127 Vasa Order of America and the Samuel Derby Post # 556 American Legion Auxiliary. Surviving is a son Clayton J. Bloomquist, with whom she made her home on Willard St. Besides her parents she was preceded in death by her husband Russell O. Bloomquist whom she married March 24, 1951 and who died March 11, 1994, two sisters in laws Beverly and Lorraine Bloomquist and a brother in law Brian Bloomquist. The funeral will be held at 11:00 a.m. Friday in the Lind Funeral Home. The Rev. John P. Saraka, pastor of the Immanuel Lutheran Church will officiate. Burial will be in the Lake View Cemetery. Friends will be received from 3-6 p.m. Thursday (today) in the funeral home. Memorials may be made to the First Lutheran Church, 120 Chandler St. Jamestown, NY 14701 or to the Chautauqua County Humane Society, 2825 Strunk Rd. Jamestown, NY 14701.
To plant a tree in memory of Shirley Bloomquist, please visit Tribute Store
Services for Shirley Bloomquist
There are no events scheduled. You can still show your support by planting a tree in memory of Shirley Bloomquist.
Visit the Tribute Store
Plant a Tree
Print
Share A Memory
Plant a Tree