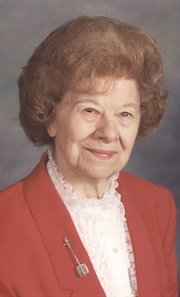 Esther L. Huestis, 92, formerly of West Ellicott, died Thursday November 4, 2010, in Heritage Park Rehab and Skilled Nursing. She was born Esther Schosek in Hamburg, NY, a daughter of Frank and Emma Daglish Schosek. She graduated from Hamburg High School and Fredonia State University with a degree in teaching. She was the widow of Walton H. Huestis who died April 4, 1990. She was also preceded in death by her parents, two brothers Willard and Glenn Schosek and a sister Blanche Braman. Esther has a son Jeffrey W. Huestis of Little River, SC; two grandchildren Mary Beth Huestis of Bradford, PA and Shawn (daughter-in-law Kyle) Huestis of Fredonia, NY and two great grandchildren Jordan Huestis of Bradford and Marlo Huestis of Fredonia. Very active in music, Esther played oboe in the Buffalo Light Opera Company Orchestra, Buffalo Museum of Science Symphony, East Aurora Orchestral Society and Jamestown Civic Orchestra. She was accompanist for the Viking Male Chorus and sang in Bethlehem Lutheran Church Choir for 31 years which were both directed by her husband. Mrs. Huestis taught primary grades for 26 years for the Southwestern Central School System, served and taught for Literacy Volunteers Board of Directors where she tutored, served as secretary for the WCA Auxiliary Board of Directors and was president for 12 years of the Chautauqua Humane Society Board of Directors. The funeral will be held at 10 a.m. Monday in the Lind Funeral Home. Rev. Timothy Hoyer will officiate. Burial will be in Hillcrest Cemetery, Hamburg, following the service in the funeral home. Friends will be received for one hour prior to the service Monday in the funeral home. Memorials may be made to Chautauqua County Humane Society, 2825 Strunk Road, Jamestown, NY 14701 or Literacy Volunteers, 509 Cherry Street, Jamestown, NY 14701. You may light a candle in remembrance of Esther at www.lindfuneralhome.com.
To plant a tree in memory of Esther Huestis, please visit Tribute Store
Services for Esther Huestis
There are no events scheduled. You can still show your support by planting a tree in memory of Esther Huestis.
Visit the Tribute Store
Plant a Tree
Print
Share A Memory
Plant a Tree