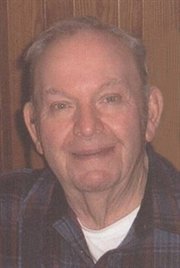 James E. Huber, 74, of 2759 Bentley Ave., Jamestown, died at 4:25 p.m. Saturday (November 6, 2010) in WCA Hospital. He was born October 8, 1936 in Jamestown, the son of the late Elmer and Celia Whitford Huber, and graduated from Southwestern Central School in 1955. Jim had been employed by MRC Bearings for over 40 years, retiring as a gauge technician. He was a life member of the NRA and belonged to the N.Y.S. Trappers Association and the Chautauqua Lake Fish Club. As a blood donor, he also belonged to the Century Club of the American Red Cross. Jim loved the outdoors and enjoyed hunting, fishing and trapping. He is survived by his wife, Sylvia Smith Huber, whom he married July 30, 1982; five children: Sherry (Bill) Johnson of Jamestown, Sarina (Edward) Thomas of Jamestown, David (Bonnie) Huber of Kennedy, Bradley Buck of Busti and Joseph Mazzone of Jamestown; eleven grandchildren: Levena (Zac) Lindahl, Benjamin and Gregory Johnson, Ashley Gregory, Stephen, Katy and Amy Dean, Joseph and Nathan Mazzone and Nicholas and Michael Johnson; eight great-grandchildren: Charles and Hunter Dean, Graclyn Hallowell, Dylan, Ashley, Chloe and Miles Alexander, and Blake Smith; and a sister, Flora Delle Pintagro of Jamestown. In addition to his parents, he was preceded in death by two sons, Steven and Michael Mazzone, and a sister, Betty Young. The funeral will be held at 11:00 a.m. Wednesday in the Lind Funeral Home. Pastor Rick Huber will officiate. Burial will be in Sunset Hill Cemetery. Friends will be received from 2 to 4 and 7 to 9 p.m. Tuesday in the funeral home. Memorials may be made to the American Cancer Society, Memorial Processing Center, 6725 Lyons St., East Syracuse, NY 13057; or to the Chautauqua County Chapter of the American Red Cross, 325 E. Fourth St., Jamestown, NY 14701.
To plant a tree in memory of James Huber, please visit Tribute Store
Services for James Huber
There are no events scheduled. You can still show your support by planting a tree in memory of James Huber.
Visit the Tribute Store
Plant a Tree
Print
Share A Memory
Plant a Tree