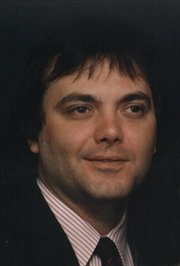 Frank L. Smeragliuolo, Jr., 57, of 2011 Willard Street, Extension, died Thursday December 15, 2011, in his home. A native of Jamestown, he was born June 20, 1954, a son of Mary Margaret Lesandro Smeragliuolo Pacitti Lensey and the late Dr. Frank L. Smeragliuolo, Sr. He was a 1972 graduate of Jamestown High School and attended Canisius College. For many years he was the owner/publisher of Nite-Line Magazine. From the time he was a toddler, his love of music spanned his entire life. He played in various bands including Black Pearl, Linear Expansion and Frankie Lewis Trio and traveled extensively throughout the United States and Canada. Surviving besides his mother of Jamestown are his wife the former Susan Allenson, whom he married November 22, 1980; three daughters Jamie and Gina Smeragliuolo of Jamestown and Sarin Smeragliuolo of Columbus, OH; a granddaughter Angelina Teater of Jamestown; a brother Donn Anthony Smeragliuolo of Lily Dale, NY and a step brother Anthony Pacitti, Jr. of Jamestown. Besides his father who died in 1975, he was preceded in death by two step fathers Anthony Pacitti and Michael Lensey and a step sister Mary Ann Pacitti. A Mass of Christian Burial will be celebrated at 10 a.m. Monday in Holy Apostles Parish, St John Catholic Church. Rev. Dennis W. Mende will be celebrant. Burial will be in Holy Sepulchre Cemetery. Friends will be received from 5-8 p.m. Sunday in the Lind Funeral Home, where a Christian Wake Service will be led at 4:45 p.m. Memorials may be made to Shriners Hospitals for Children-Erie, 1645 W. 8th Street Erie, PA 16505. You may light a candle in remembrance of Frank at www.lindfuneralhome.com.
Print
Monday
19
December