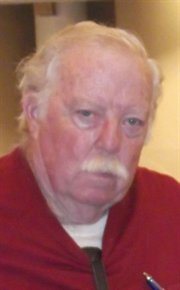 Obituary of Theodore B. Peterson

Theodore B. "Ted" Peterson, 76, of 849 East Second St. Jamestown, NY, passed away on Saturday, January 17, 2015, in the UPMC Hamot Medical Center, Erie, PA. A lifelong area resident, he was born November 20, 1938 in Jamestown, NY a son of the late Theodore B. and Bettina Peterson. Before his retirement he was employed by MRC Bearings as a machine operator for 48 years. Ted was a veteran of the U.S. Navy and was a very patriotic person. He always carried a copy of the Constitution of the United States in his pocket. He was a member of the National Rifle Association, the Carroll Rod &amp; Gun Club, Moose Lodge, Veterans of Foreign Wars, the Samuel Derby Post #556 American Legion, Frewsburg, the North American Hunters and a life member of the Harley Davidson Club. He was also a past president of the Town of Carroll Historical Society and a very active member of the AA where he was very proud of his sobriety for the past 30 years. Surviving are his wife, Roberta "Bert" Peterson whom he married June 30, 1992, three sons, John Peterson of Falconer, NY, Robert Peterson, James Peterson both of Frewsburg, NY, five grandchildren, Brandi Peterson of Randolph, NY, John T. Peterson of Falconer, Jami Raymond and Nathen Peterson both of Frewsburg, Jeremy Peterson of Kennedy, two great grandchildren, Braelynn and Cassidy, five step-children, Bobbie Jo Saeli, Brenda Anthony, Kristine Edwards, Susan Anthony, Keith Anthony as well as several step-grandchildren and step-great grandchildren. Besides his parents he was preceded in death by a brother, Richard Peterson and a sister Sandra Johnson. The funeral will be held at 1:30 p.m. Wednesday in the Lind Funeral Home. The Rev. Howard Plunkett of Erie, PA will officiate. Burial will be in the Sunset Hill Cemetery. Friends will be received from 4-7 p.m. Tuesday in the funeral home. Memorials may be made to the Town of Carroll Historical Society, c/o Town of Carroll, 5 Main St. Frewsburg, NY 14738.
Print