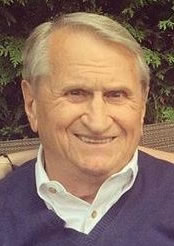 Ted attended school in Buffalo. He then served in the US Air Force during the Korean conflict as a Weather Technician on a WB-29 crew in Guam. Missions included flying through typhoons while collecting weather data. This unit was later renamed the Hurricane Hunters.

His professional career was spent in the petroleum industry. He spent 20 years working for Exxon as a Marketing District Manager. In 1974, Ted and his wife purchased Yaw Oil Co; he served as President until 1996. After retiring he left operations of the business to his family.

He was a former member of the Rotary Club of Jamestown. He was also a member of the Lakewood Rod and Gun Club and a long-time member of Moon Brook Country Club where he enjoyed his favorite activity of golf. Ted, along with his wife, quietly supported individuals and causes that were important to them.

Ted enjoyed traveling with his wife and family, especially spending time with his grandchildren. He will be greatly missed by his daughter-in-law Tracy Bogdan, and sons-in-law Steve Bowman and Jon Albro.

Ted was preceded in death by his wife, Carol Blount Bogdan, whom he married on April 8, 1961 in Buffalo and who died September 27, 2005; 3 sisters: Jean Cieplinski, and Helen and Rose Bogdan; and 4 brothers: Frank, Victor, Chester and Joseph Bogdan.

A Memorial Mass will be held at 11 a.m. Thursday, August 3rd in Holy Apostles Parish, Ss. Peter & Paul Church. The Rev. Dennis W. Mende will be celebrant. Burial was in Sunset Hill Cemetery.

In lieu of flowers, memorials may be made to the Chautauqua Region Community Foundation, 418 Spring Street, Jamestown, NY 14701; or Blair House, Hospice of Warren County, PO Box 68, Warren, PA 16365.

To plant a tree in memory of Theodore Bogdan, please visit Tribute Store

Share Your Memory of
Theodore
Upload Your Memory View All Memories
Be the first to upload a memory!
Share A Memory
Plant a Tree