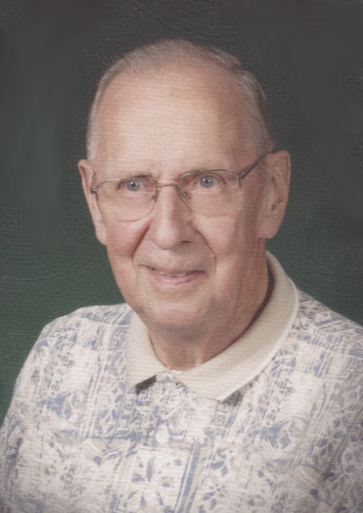 Robert E. Olson, 94, of Jamestown, passed away Monday May 20, 2019, in Heritage Park Rehab and Skilled Nursing. A Jamestown area resident all of his life, he was born November 12, 1924, a son of the late Eugene and Evelyn Johnson Olson. He was a 1942 graduate of Celoron High School. He was a WWII veteran of the US Army serving from 1943-46 in the Pacific Theatre. Prior to his retirement in 1988, he was president of Adanlock, Inc. He was a member of Lakewood Rod and Gun Club and the Celoron/West Ellicott Senior Citizens, Bethel Lutheran Church and the former Westminster Presbyterian Church. His life memberships include Herman Kent Post American Legion, John W. Tiffany Post Veterans of Foreign Wars, AMVETS and Vikings. Surviving are two daughters Karen Lee Olson and Pamela Gene (Kevin) Till both of Jamestown; three step grandchildren Jeremy Till, Amanda (John) Grubenmann and Jacob Till; four step great grandchildren; a brother C. Edward (Marilyn) Olson of Matamoras, PA and several nieces and nephews. He was preceded in death by his wife Dorothy Nelson Olson, whom he married November 9, 1946 and who died July 28, 2011 and two sisters Muriel Olson and Shirley Gronquist Lindell. A memorial service will be held at 11 a.m. Friday in the Lind Funeral Home. Rev. Gerald A. Haglund will officiate. Inurnment will be in Lake View Cemetery. Friends will be received for one hour prior to the service Friday in the funeral home. In lieu of flowers memorials may be made to Chautauqua Region Community Foundation, Veterans Memorial Commission Relocation Fund, 418 Spring Street, Jamestown, NY 14701. You may leave words of condolence at www.lindfuneralhome.com.
To plant a tree in memory of Robert Olson, please visit Tribute Store
Friday
24
May

Share Your Memory of
Robert
Upload Your Memory View All Memories
Be the first to upload a memory!
Share A Memory
Plant a Tree