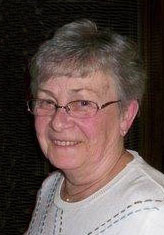 Barbara J. Olander, 78, of 347 Howard Ave. WE, Jamestown, passed away on Thursday, June 13, 2019 at UPMC Hamot in Erie, Pa. She was born on Sept. 4, 1940 in Jamestown, a daughter of the late Carl and Dorothy Wilson Anderson. She was a 1958 graduate of Jamestown High School. Before retiring in 2005 from the federal government, she had worked at Naval bases in Norfolk, VA, Hampton, VA, Tampa, FL, and Lakeland, FL. She had also worked at the Virginia Beach Fire Administration, Virginia Beach Police Dept., and Nationwide Insurance. A former member of the First Congregational Church, she was a past member of Beta Sigma Phi, and the American Legion Auxiliary, Celoron Post #777. She was an avid reader, a seamstress, and enjoyed baking, cooking, gardening, stained glass, knitting, crocheting, and quilting. She will be missed greatly and gave Carl eleven of the best years of his life. Barbara is survived by her husband, Carl D. Olander, whom she married Sept, 4. 2009; two daughters: Michele (Ronald) Youmans and Bethany (Forest) LaCount; two sons: Kenneth (Marsha) Johnson and Martin (April) Johnson; five step daughters: Larissa (Lucas) Walrod, Loretta Swanson, Aubrae (Tony) Neri, Tracy Olander, Laura (Chris) Allen; 10 grandchildren; 12 great grandchildren; and several step grandchildren. In addition to her parents, she was preceded in death by a sister Betty Anderson on June 6, 2019, in Florida. No visitation or service will be observed. Memorials may be made to the Herman Kent Post #777 American Legion, 26 Jackson Ave., Jamestown, NY 14701.
To plant a tree in memory of Barbara Olander, please visit Tribute Store
Services for Barbara Olander
There are no events scheduled. You can still show your support by planting a tree in memory of Barbara Olander.
Visit the Tribute Store

Share Your Memory of
Barbara
Upload Your Memory View All Memories
Be the first to upload a memory!
Share A Memory
Plant a Tree