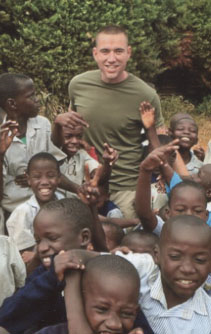 Jeremy M. Bruce, 35, of 39 Norton Ave. Jamestown, NY, passed away Sunday, September 29, 2019, in the University of Michigan Hospital, Ann Arbor, MI, surrounded by his family after a fierce battle with cancer. He was born April 11, 1984 in Albuquerque, New Mexico, a son of Elizabeth "Beth" Gustafson and David D.L. Bruce. Jeremy was a 2002 graduate of Jamestown High School and earned his bachelor's degree in political science from the University of Colorado in 2015. He was a proud veteran of the U.S. Marine Corps serving from December 2004 to December 2008 where he served two combat tours of duty in Fallujah, Iraq and also was involved in the hurricane Katrina relief mission in New Orleans. He was awarded the Purple Heart for his heroic efforts. Jeremy was one who loved to travel the world and had visited 56 countries during his lifetime. He was very proud of the children's orphanage that he started in Uganda and he referred to all of the children as his African family. While living in Colorado he was active in politics and had also taught school in the Denver Public Schools for two years. Surviving are his mother and step-father, Beth and David Wilfong of Jamestown, his father and step-mother, David and Kathy Bruce of Erie, MI, his brothers, Jason Bruce of Houston, TX, Daniel (Sandy) Bruce of MI, his sisters, Kasey Wilfong of Jamestown, Nicole Bruce of Tampa, FL, Julie (Rob) Grodi, Mariah (Patrick) Masell , Katie (Patrick) Valley all of MI, his maternal grandparents, Rev. Charles and Esther Gustafson of Jamestown, his paternal grandmother, Rosemarie Finley of MI, his nieces and nephews, Salena, Adri, Pippa, Sawyer, Jakob, Jay, Gauge and his special niece Vera Bruce, as well as his loving companion Hanna Windmill. He was preceded in death by his paternal grandparents, Leonard and Lois Bruce and Isabelle Giltinan. The funeral will be held at 11 am Friday in the Lind Funeral Home. The Rev. Reggie Smith of the Blackwell Chapel will officiate. Burial will be in the Lake View Cemetery. Friends will be received from 2-4 & 7-9 pm Thursday in the funeral home. Memorials may be made to Persell Middle School, (to support student activities), 325 Baker St. Jamestown, NY 14701.

Share Your Memory of
Jeremy
Upload Your Memory View All Memories
Be the first to upload a memory!