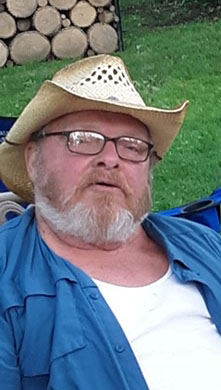 George E. Dunham, 69, of 35 E. lake Street, Celoron, died Tuesday October 29, 2019, in UPMC Hamot, Erie, PA. He was born December 22, 1949, in Latrobe, PA, a son of the late Forest and Ethel Myers Dunham. For much of his working career, he was a pipe fitter for local union. He was a member of 511, We Believe and volunteered at UCAN Mission. He enjoyed boating, camping and riding his Harley Davidson motorcycle, but more than anything he loved his Lord. Surviving are his wife Linda Inguagiato Dunham, whom he married December 21, 1985; two daughters Karie Johnson of Ellington and Krsitie Dunham of Celoron; four grandchildren John Dunham, Jacob Johnson, Lucas Johnson and Zachary Dunham and siblings David (Tina) Dunham of Erie, PA, Maxine Dunham of Falconer, Mark (Nan) Dunham of Jamestown and Forest (Miriam) Dunham , Jr. of Georgetown, KY. Besides his parents he was preceded in death by a son Peter Dunham. A celebration of life will be held at 4 p.m. Saturday in Calvary Chapel, Russell, PA. Rev. Jeff York will officiate. Friends will be received for one hour prior to the service Saturday in the church. Memorials may be made to 511 Club, 511 East Second Street, Jamestown, NY 14701. You may leave words of condolence at www.lindfuneralhome.com.
To plant a tree in memory of George Dunham, please visit Tribute Store
Saturday
2
November

Share Your Memory of
George
Upload Your Memory View All Memories
Be the first to upload a memory!
Share A Memory
Plant a Tree