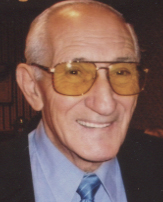 Modesto Charles Yerico, 91, formerly of Big Tree Road Lakewood, NY, passed away Monday February 3, 2020 in UPMC Chautauqua Hospital. He was born October 21, 1928 in Dunkirk, NY the son of the late Anthony and Josephine Allessi Yerico. Modesto was raised on a farm in Sheridan, NY. After finishing school, he learned auto body repair at various shops and opened his own shop in Dunkirk, NY. He went on to be an Insurance Auto Appraiser for independent Companies, then to Travelers Insurance Company, Jamestown Office and to the Albany Office from which he retired. He and his late wife Lois lived in the Dunkirk and Fredonia area for many years, including Chautauqua Road in Fredonia from 1960 to 1972. From 1983 to 1992 they resided in Oneonta, NY, and moved to Lakewood in 1992. He was a member of the Lakewood United Methodist Church, the Kosciuszko Club in Dunkirk, and enjoyed hunting, fishing, and in later years took up golf. Surviving are two sons: Anthony Yerico of Fredonia, NY; Joseph (Deborah) Yerico of Forestville, NY; eight grandchildren and four great grandchildren. Besides his parents, he was preceded in death by his wife Lois Harp Yerico whom he married May 28, 1950 and who died November 30, 2010; a son, Robert Yerico; a daughter, Patti Korwin; three brothers, Anthony, Luis, and John; and a sister, Josephine. A memorial service will be held at 11 a.m. Saturday February 22 in the Lakewood United Methodist Church. The Rev. Violet Davidson will officiate. The family will receive friends for one hour prior to the service Saturday in the church. In lieu of flowers, memorials may be made to the Lakewood United Methodist Church, 164 Shadyside Ave., Lakewood, NY 14750.
To plant a tree in memory of Modesto Yerico, please visit Tribute Store
Saturday
22
February

Share Your Memory of
Modesto
Upload Your Memory View All Memories
Be the first to upload a memory!
Share A Memory
Plant a Tree