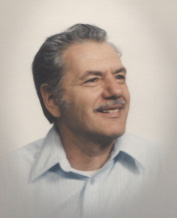 Anthony Loverme, 89, formerly of 50 Cedar Street, Jamestown and Sun City, AZ, died Tuesday September 8, 2020, at the home of his daughter on Swan Street. He was born January 8, 1931, in Jamestown, a son of the late Giuseppe and Rosa Coffaro Loverme. He was a 1949 graduate of Jamestown High School and served in the Naval Reserve. Prior to his retirement, he was employed by Marlin Rockwell as a bearing grinder. In addition, he and his wife owned and operated Loverme Blacktop and Loverme's Quick Stop Grocery. He was a communicant of St. James Catholic Church, was a member of the Moose Lodge and played bocce in Jamestown and Arizona. He built his home, made handcrafted jewelry and enjoyed hunting, fishing, gardening and camping. Surviving are eight children Eleanore Anzalone of Rochester, NY, Rosalie (Mike) Bemis of Macedon, NY, Anthony (Suzanne Kelsey) Loverme of Niobe, Cynthia (Vincent Racitano) Loverme of Jamestown, Joel (Sharon) Loverme of the Philippines, Kenneth Loverme of Panaca, NV, Robert Loverme of Sun City, AZ and Naida Tedquist of Phoenix, AZ; twenty four grandchildren; thirty one great grandchildren and two sisters Mary Rainier of Jamestown and Mamie Gadra of Gerry. Besides his parents he was preceded in death by his wife Naida Stowell Loverme, whom he married February 2, 1952 and who died January 12, 2002; a granddaughter Laura Loverme; two brothers Charles and Frank Loverme and a sister Sarah Cappano. The funeral service will be live streamed on Facebook through the Lind Funeral Home Facebook page. Visitation will not be observed. Memorial may be made to Chautauqua Hospice and Palliative Care, 20 W. Fairmount Avenue, Lakewood, NY 14750 or a charity of choice. You may leave words of condolence at www.lindfuneralhome.com.

Share Your Memory of
Anthony
Upload Your Memory View All Memories
Be the first to upload a memory!