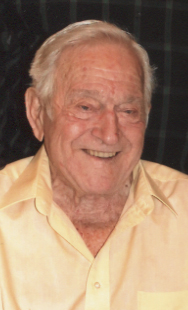 Nicola G. "Nick" Ingrao, 96, of Jamestown, NY, passed away at 8:00 am Friday, November 13, 2020, in Absolut of Westfield. Nick was born December 26, 1923 in Jamestown, NY, a son of the late Salvatore and Grace Arcadipane Ingrao. He was a proud veteran of the U.S. Army serving from February 10, 1943 to January 24, 1946. During his tour of duty he received the American Service Medal, Asiatic Pacific Service Medal, Good Conduct Medal, the Philippines Liberation Ribbon and the World War II Victory Medal. While living in Florida for over 20 years, he was the owner of the American Seal and Stripe Company in Port St. Lucie, Florida. He also worked in the construction business in the Jamestown area where he was co-owner of V&N Construction and was a draftsman for the former Scalise Construction Company. He was a communicant of St. James Catholic Church and a member of the American Legion, the Knights of Columbus, War Vets Recreation Club and the Port St. Lucie Moose Lodge. Surviving are his wife of 54 years, Carol Anderson Ingrao whom he married August 12, 1966, four daughters; Cynthia Orlando of Jamestown, Michelle Swanson of Gerry, NY, Fabiean (Joseph) Hershey of Conroe, SC, Melissa (Michael) Rusignuolo of Ft. Pierce, FL, three step-children; Jeffrey (Doreen) Olson of Rochester, NY, Timothy (Linda) Olson of Sinclairville, NY, Randall (Candice) Olson of Birmingham, AL, several grandchildren, great grandchildren and great great grandchildren. Besides his parents, he was preceded in death by a brother, Angelo Ingrao, a sister, Concetta Searsone and a step-son, Greg Olson. Due to the Covid-19 pandemic, a memorial service will be held at a later date. Visitation will not be observed. Inurnment will be in the Lake View Cemetery at the time of the memorial service. Memorials may be made to Chautauqua County Hospice and Palliative Care, 20 West Fairmount Ave. Lakewood, NY 14750.

Share Your Memory of
Nicola
Upload Your Memory View All Memories
Be the first to upload a memory!