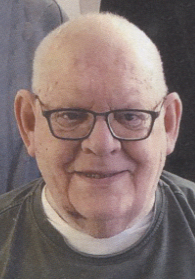 On January 12, 2021, Donald F. Miller, 88, formerly of Summit Avenue in Jamestown, left this world to be with his Lord and Saviour after spending his later years at Heritage Green Rehab & Skilled Nursing. Donald was born in Jamestown on July 15, 1932, a son of the late Floyd and Elsie Miller. After graduating from Jamestown High School and attending Alfred University, he was drafted into the US Army where he was a cook, serving from 1953 to 1955. He was employed by Marlin Rockwell (SKF) in Falconer for 39 years, retiring in 1995. For many years, Donald was a member of the Calvary Assembly of God Church where he served as a deacon. While at the nursing home, he enjoyed being the "puzzle guy" and serving as president of the resident council. Donald is survived by his wife of 63 years, Betty L. Foulkrod Miller, whom he married in 1957; two daughters: Cynthia (David) Gollnitz and Sandra Sweet, both of Jamestown; three grandchildren: Jason (Kristen) Gollnitz of Spencerport, NY, Lacey (Michael) Burns of Jamestown and Lynn Terry, Jr. of Jamestown; four great-grandchildren; and his sister, Kathy (Bryan) Murray of Falconer, NY. Besides his parents, he was preceded in death by a brother, James O. Miller. 'We would sincerely like to thank Heritage Green for the many years of care for our Dad, especially during this difficult time for healthcare workers.' A private family service will be held in the Lind Funeral Home, officiated by the Rev. Sam Shreffler. Burial will be in Sunset Hill Cemetery. Visitation will not be observed. The family suggests memorials be made to an animal rescue organization of one's choice.
To plant a tree in memory of Donald Miller, please visit Tribute Store
Services for Donald Miller
There are no events scheduled. You can still show your support by planting a tree in memory of Donald Miller.
Visit the Tribute Store