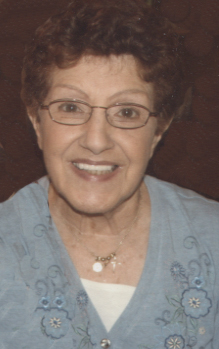 Obituary of Santina A. Genco

Santina A. "Sandy" Franchina Genco, 86, of Jamestown, NY, passed away at 10:45 am Thursday, February 18, 2021, in UPMC Chautauqua, following a brief illness. An area resident for most of her life, she was born September 4, 1934 in Corry, PA, the youngest child of the late Samuel and Jenny Leone Franchina. Following her father's passing at a young age she was raised by her mother and step-father Joe Jerrusso. She was a graduate of Corry Area High School. In her earlier years, she was employed as a window dresser for the former Nugent's Ladies Wear and the former Grants Department Store. She was also very artistic and showed her talent as a furniture decorator for Maddox Table Company. In later years she was the food demo lady at the former Quality Markets Store of Foote Ave. and also worked at Miletti's Deli and Ecklof Bakery and Deli. Surviving are her husband of 64 years, Paul R. "Sonny" Genco whom she married July 3, 1956, her six children; Terry Carlson, Paula (Bob) Verga, Paul (Denise) Genco, Jr, Cathy Genco-Hearburg, Michael (Ly) Genco, Annie (David) Carlson, ten grandchildren; Ryan, Erik, Corey, Lauren, Thi Ly, Michael, Ashley, Meagan, Michelle, Amy and Tommy Nelson (son of the late Gloria), seven great grandchildren; Alexzandra, Sophie, Sara, Adrianna, Michael Paul, Alexis, Matthew and Baby Carlson, on the way. Besides her parents and step-father, she was preceded in death by two daughters, Gloria (Mike) Bowmaster, Donna Nelson, a grandson, Michael A. Genco, and her four siblings, Josephine Davids, Louie Franchina, Sebastian "Busty" Franchina and Rose Reed. A private family service will be held on Monday in the Lind Funeral Home. The Rev. Ron Lemon, pastor of Koinonia Christian Fellowship will officiate. Burial will be in the Sunset Hill Cemetery. Family and friends will be received on a walk through basis from 10:00 – 1:00 pm Monday in the funeral home where social distancing will be observed and masks must be worn while in the funeral home.
To plant a tree in memory of Santina Genco, please visit Tribute Store
Services for Santina Genco
There are no events scheduled. You can still show your support by planting a tree in memory of Santina Genco.
Visit the Tribute Store

Share Your Memory of
Santina
Upload Your Memory View All Memories
Be the first to upload a memory!
Share A Memory
Plant a Tree