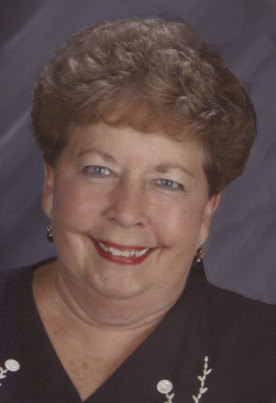 Joan Patricia Harrington Ericson Joanie was born in Jamestown, NY on May 11, 1933. She was the only child of Leo Vincent and Helen Leona Brezell Harrington. Her father Leo was one of eight Harrington siblings from Warren, PA including two of his brothers, John and Paul. She graduated from Jamestown High School, Class of 1951. During her time in high school, she was the secretary of the JHS Junior Cabinet and President of the Theta Gamma Sorority. Following high school, she was a part of the 2nd graduating class from Jamestown Community College in 1953. Upon graduation, she worked as the secretary for Dr. Carlyle C. Ring who was the Superintendent of Jamestown Public Schools. On September 1, 1956, Joanie married Dudley Rollens "Spud" Ericson at Lenacre in Lakewood, NY. Once married, they moved to East Lansing, Michigan so Spud could finish his degree and ROTC at Michigan State University. After his graduation, they moved to San Antonio, TX for Spud's USAF officer training and then to Travis AFB in California. While serving at Travis, their first daughter Patti was born at the Travis AFB hospital. After the birth of their first daughter and Joanie's return to Jamestown, she devoted herself to being a full-time mother. They bought a house on Mont Alto Drive in Jamestown where they lived for 35 years. Their second daughter Susie was born at WCA. Joanie and Spud had a wonderful circle of friends from very early on when they returned to Jamestown and those friendships continue today. The couples had regular potluck dinners throughout the year. The women of that group have enjoyed playing bridge to this day while the men would get together on a different night to play pitch. Joanie was active in many community organizations. She joined Jamestown Jayncees, serving as their secretary, and was a longtime member of the Norden Women's Club, being the recording secretary for a time. A lifelong member of Crèche, she served as a Tag Day Captain and secretary during her time with them. She enjoyed her time with the WCA Auxiliary working in the Snack Shop and being Co-Chair there. Her other organizations include Home Bureau crafting group and Moonbrook Women's Auxiliary (treasurer). Upon their move to Lakewood in 1996, Joanie joined the Lakewood Women's Club. She served 2 years as President for them and was also a member of their traveling bridge group. As a family, they had annual road trips to different places around the United States. During the bicentennial year, they spent 5 weeks traveling around the USA. Joanie and Spud relished their regular visits to see their daughter Susie and her boys in Minot, North Dakota, Dayton, Ohio, Cheyenne, Wyoming and Colorado Springs, Colorado. Those grandsons also came and spent 5 weeks with them every summer while they were growing up. Joanie and Spud enjoyed a trip to 8 European countries with fellow Rotarians, as well as trips with friends to the Caribbean, the Grand Caymans, and Hawaii. When her daughters both left home, Joanie went to work as a bank teller at Chase Bank in Falconer, retiring in 1995. She really enjoyed her time there and the many friendships that came from that time. She was a member of the Jamestown First Baptist Church before becoming a member of the First Presbyterian Church of Jamestown. Surviving is her husband, Spud, and their two daughters, Patricia Leake (Mark Territo) of Jamestown and Susan McCarty of Colorado Springs. Also surviving are four grandsons: Daniel (Katrina) Leake of Lakewood, NY, Daniel (Katie) McCarty of Virginia, Michael McCarty and Jack McCarty of Colorado Springs; and two great-grandchildren, Caleb McCarty of Virginia and Madison Leake of Lakewood, NY. There are also two great-granddaughters due in July and September. Joanie had a beautiful, gentle soul that was full of life and love. She was silly and sweet and very proud that she was Irish. A lover of nature, the beach and flowers, she had a green thumb and made beautiful flower arrangements. Her family will always cherish the countless heartwarming memories of all the wonderful time they spent together. The family would like to thank Terri Lynn Best and the wonderful ladies who work for her, as well as the employees from Hospice for the loving care they provided to Joanie over the last couple of years. The family will be present at the Celoron American Legion, 126 Jackson Ave. from 1-5pm on Saturday, May 8th to greet friends and Celebrate Joanie. Please, Remember Your Mask. A private family graveside service will be held in Sunset Hill Cemetery. Donations may be made to Chautauqua Hospice & Palliative Care at 20 W. Fairmount Ave., Lakewood, NY 14750; or Chautauqua Region Community Foundation at 418 Spring St., Jamestown, NY 14701.

Share Your Memory of
Joan
Upload Your Memory View All Memories
Be the first to upload a memory!