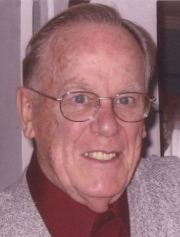 Robert L. Ellis, 94, of 165 Aldren Ave., Jamestown, passed away Tuesday morning, August 24, 2021 at UPMC Chautauqua. He was born November 12, 1926 in Jamestown, a son of the late Lester A. Ellis and Eila Annis Ellis Carlson. He was raised by his mother and late stepfather, Oscar W. Carlson. Bob was a veteran of World War II, joining the Navy two months after his 17th birthday, however, he was allowed to graduate before being called to active duty. He was a 'plank owner' (original crew member) aboard the aircraft carrier USS Bairoko CVE 115 where he served as a radio operator in the Pacific Theater. He was discharged in 1946. Bob was a graduate of Jamestown High School class of 1944. In later years he kept the records for the class and was an active member of its reunion committee. On March 19, 1949, Robert married Regina Johnson in her parents' home and together celebrated their 70th anniversary prior to her passing on May 20, 2019. Bob and Regina spent most of their lives in Jamestown where he worked for the S.M. Flickinger Co. for over 30 years in a variety of positions. He opened and operated the Cash & Carry warehouse in Jamestown in 1956. He also opened Cash & Carry warehouses in Dunkirk, Oil City and Erie, Pa. and was responsible for the operations of each. He was a buyer for the company for many years and headed up the buying department. He also served the company as Director of Operations from 1972 to 1975. Bob and Regina moved to Florida in late 1975 where he headed up the buying department for Affiliated of Florida in Tampa. He was a member of Busti Federated Church, Lakewood Golden Agers and an associate member of the Busti Fire Department. Bob was an active member of Ingjald Lodge #65 Independent Order of Vikings where he held a number of offices in both the local lodge and the National Order. He was chief of the Ingjald Lodge in 1966. He was also a member of the Lakewood Rod & Gun Club and AMVETS Post #1996. He enjoyed reciting poetry and telling stories, and entertained senior citizen groups and nursing home residents throughout the area. Surviving are three children: Linda Anderson of Jamestown, David "Chet" Ellis of Busti and Kay (Brian) Nelson of Falconer; six grandchildren: Eva Christina Schreckengost (Wayne Osgood) of Randolph, Jennifer Munn (Ryan) of Charlotte, NC, Ted Ellis of Busti, Tad Ellis (Bobbie-Jo) of Willow, Alaska, Michael Ordines (Carrie) and Scott Ordines (Lindsey), both of Jamestown; and 12 great-grandchildren. Besides his parents, stepfather and his wife, Regina, Bob was preceded in death by an infant son, Donald Ellis; son, James Ellis; son-in-law, Daniel Anderson; brother, Gerald "Jerry" Ellis; stepsister, Diane Holmes and stepbrother, Jack Carlson. The funeral will be held at 2 p.m. Friday in the Lind Funeral Home. The Rev. Lee O'Brien, pastor of Busti Federated Church, will officiate. Burial will be in Sunset Hill Cemetery. Friends will be received from noon to 2 p.m. Friday for two hours prior to the funeral service. Memorials may be made to Busti Federated Church, 875 Mill Road, or the Busti Fire Department, 886 Mill Road, both Jamestown, NY 14701.